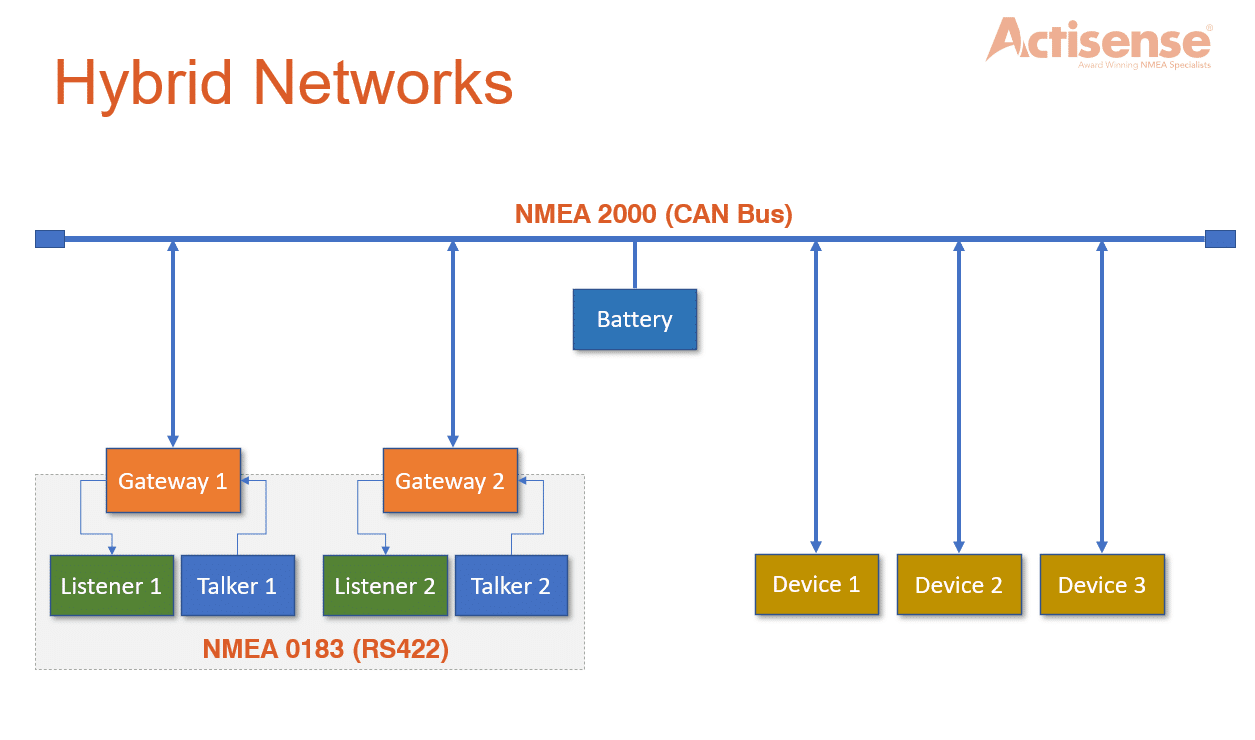 What do you do if you have a boat with NMEA 0183 equipment but want to benefit from the convenience and improvements of an NMEA 2000 network. Here we explore the advantage and ability to create NMEA hybrid networks whilst discussing how NMEA data conversion makes this possible.

However, that transition coupled with many end users desiring to continue using existing “perfectly good” NMEA 0183 devices and the subsequent removal of NMEA 0183 ports from NMEA 2000 devices, has created the need for hybrid NMEA network solutions.

So, how can data be shared between these disparate networks?

The answer is by using the NGW-1 NMEA 2000 Gateway. Using this gateway device will allow bidirectional data conversion and sharing, meaning the two networks can in fact act as one. Each NMEA 0183 data source can be easily represented individually on the NMEA 2000 network.

Using an individual NMEA 2000 Gateway for each NMEA 0183 Talker or Listener also offers many benefits over the alternative idea of using an NMEA 0183 Multiplexer: 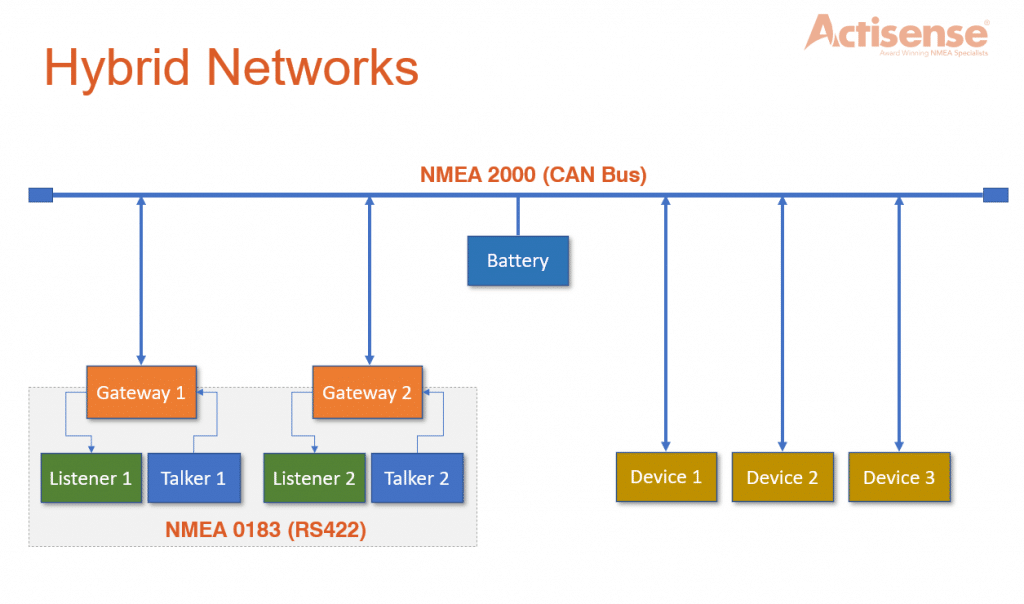 Data Conversions: How does it all work?

There are many complexities to consider when looking to achieve bidirectional conversion from NMEA 0183 sentences to NMEA 2000 PGN messages and vice versa.

The below graphic breaks down some of the complexities of the Conversion Matrix. 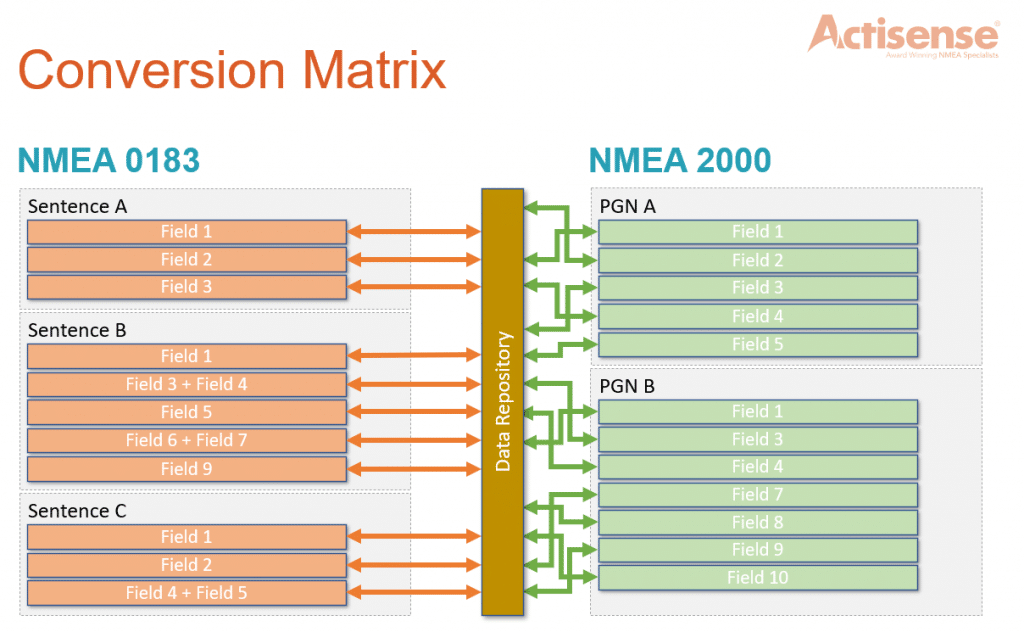 Three key points to highlight are:

A critical idea to grasp when you need to configure an advanced NMEA 2000 Gateway, such as the NGW-1, is understanding the difference between Periodic and Non-Periodic messages.

The majority of NMEA 2000 PGNs are periodic in nature, where the data inside those messages updates or refreshes at a specific rate – once, twice or even twenty times per second for example.

The screenshot below is taken from the freely available Actisense Toolkit that offers fine tune configuration of which messages are enable and the individual message transmit rates. 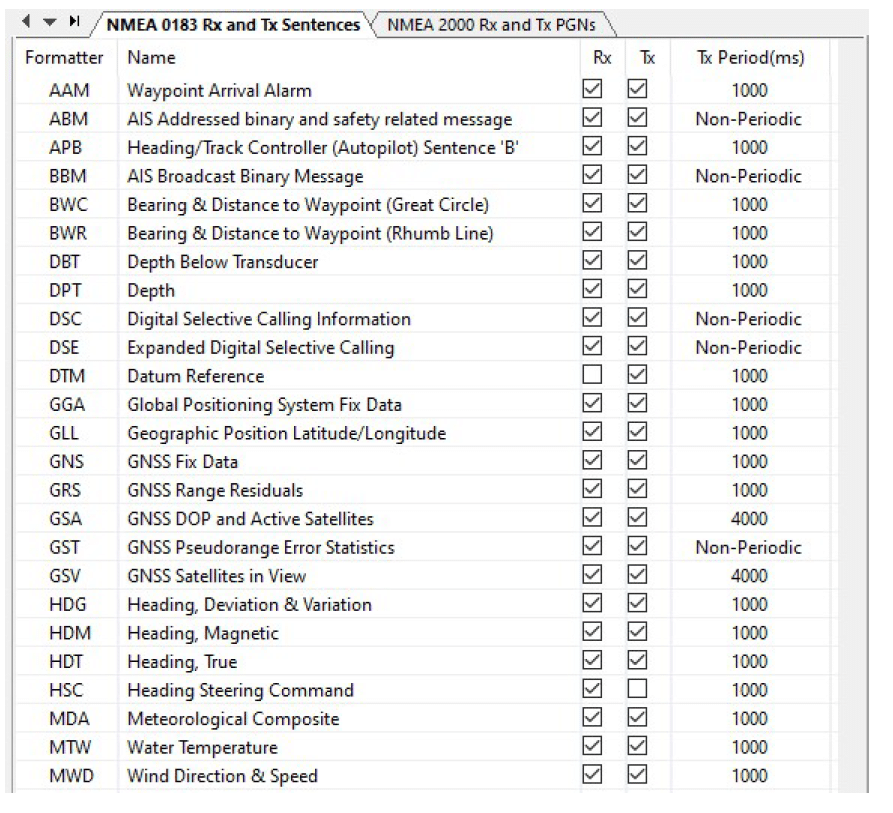 In contrast, non-Periodic messages are typically unique in nature, which means that the data inside those messages is unique each time or at least the update or refresh rate is undefined.

AIS messages are interesting as they fall into a grey area because it could be argued that they are periodic, however as that period is extremely long, being up to 6 minutes for the Message 5 from a Class A transponder, they are treated as non-periodic. 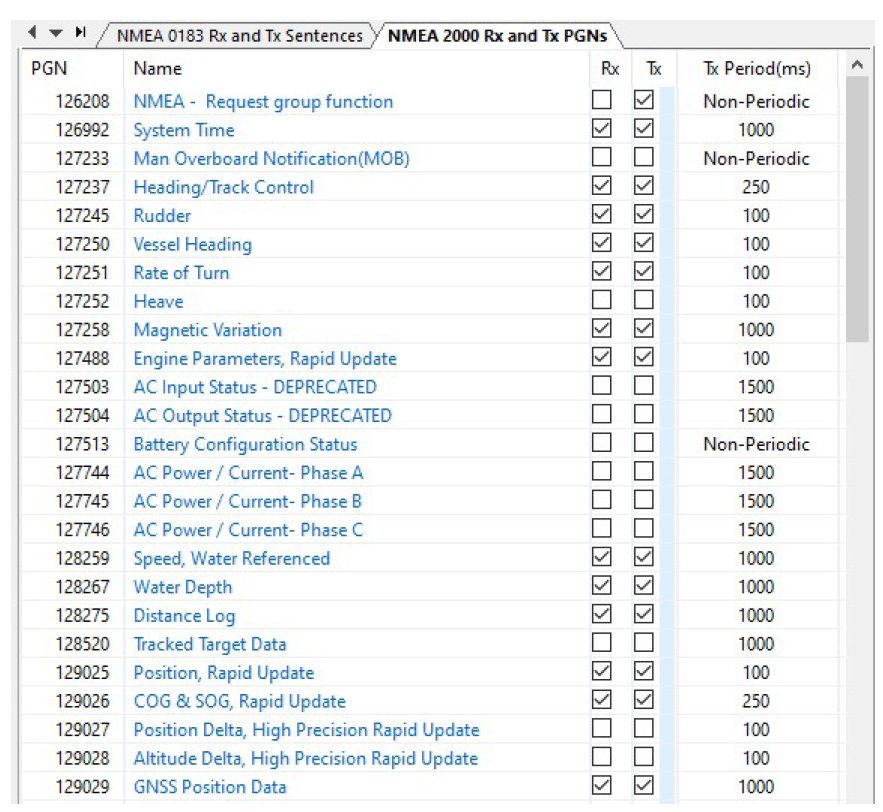 The below screenshots are taken from EBL Reader, our freely available Electronic Binary Log Viewer application.

Water Depth is one of the simplest Conversion Matrix mappings between NMEA 0183 and NMEA 2000 that is direct and logical.

Approximately 40% of the Conversion Matrix contains straightforward mappings like this one: 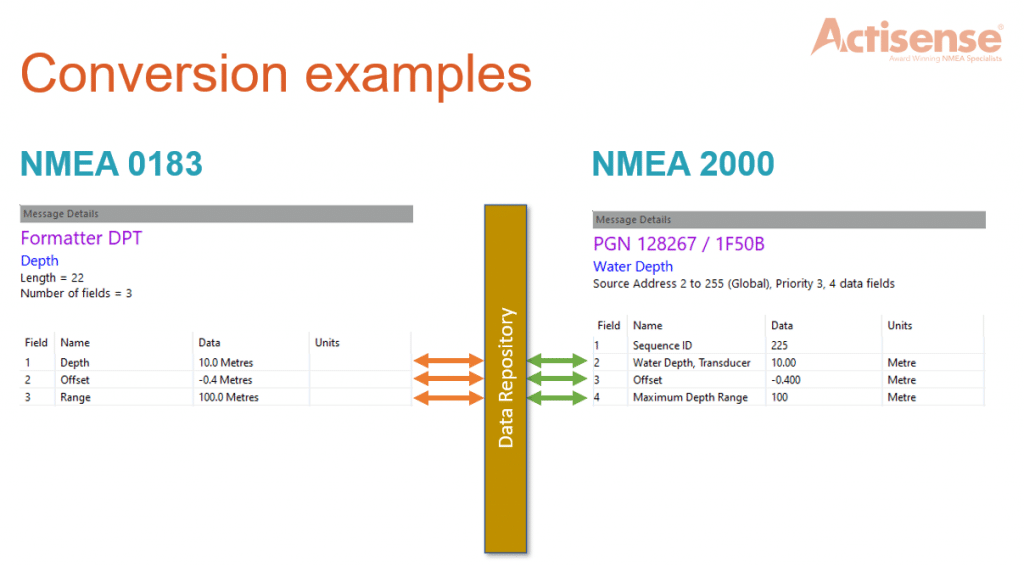 The remaining 60% of the Conversion Matrix becomes increasingly complex and this is where the vast experience we have amassed over the past 12 years becomes significant.

Through customer feedback, help from other manufacturers such as Raymarine and our own investigations, the sometimes very subtle nuances of NMEA Conversions have been tweaked and honed to deliver a reliable output.

The below example highlights a few interesting points: 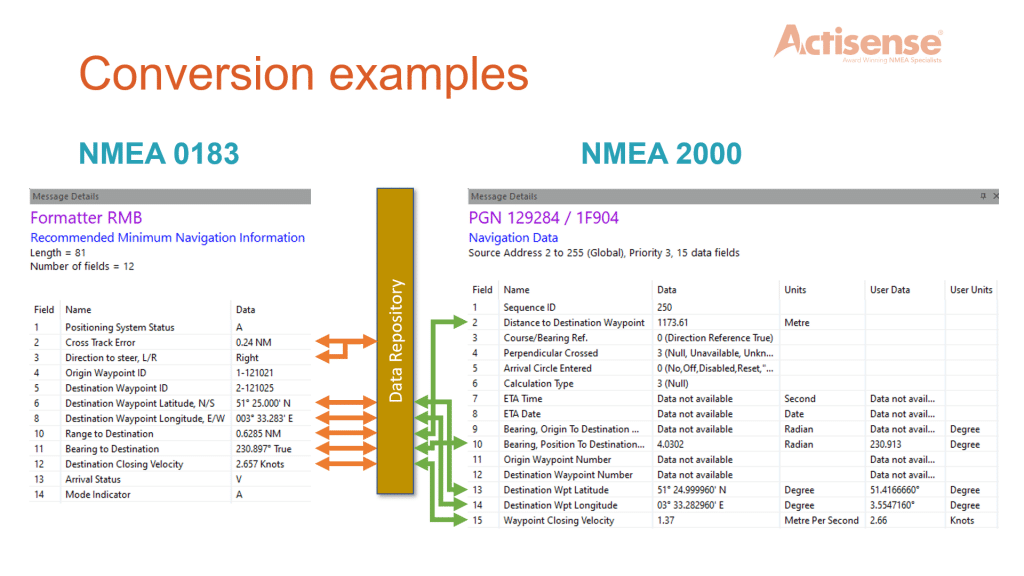 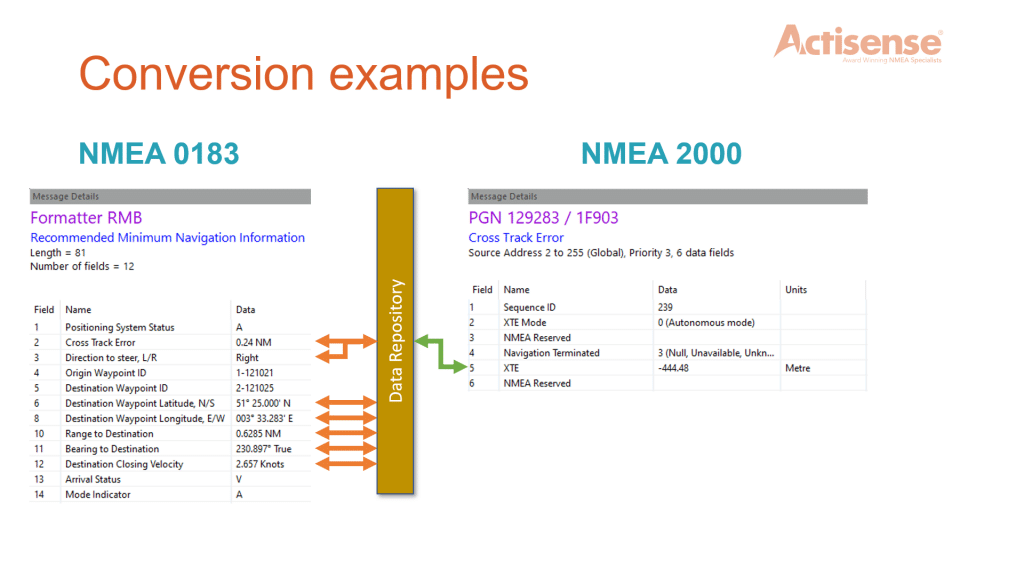 There are some NMEA data conversions that fall into grey areas that come with our Tech Support team. Let’s discuss and dispel these here:

The first grey area concerns XDR and the NMEA 2000 PGNs that it could map to, such as the Temperature, Pressure and Engine Parameters PGNs.

XDR is an NMEA 0183 generic Transducer Measurements sentence that was intended to replace several sentences that were subsequently deprecated, such as the Meteorological sentence MDA, but that has never happened. The reason for that is because the contents of an important sentence field were not defined, greatly limiting its real-world use. As it has been easy for NMEA 0183 Listeners to subsequently misunderstand the real meaning of each XDR sentence implemented by different manufacturers, it was deemed too problematic to add that conversion to the NGW-1.

However, to help improve this grey area, in 2016 Actisense proposed to the NMEA 0183 Working Group, the missing definitions for the ID string field that could make XDR useable in practice. Some of those strings are highlighted in orange in the below table.

That proposal was accepted and we’re pleased to say that the new definitions were released with NMEA 0183 v4.11 in 2019. Now, with the hope of triggering MFD manufacturers into implementing the necessary decode in their products, XDR conversions will be added to the NGW-1 when we next revisit the Conversion Matrix. 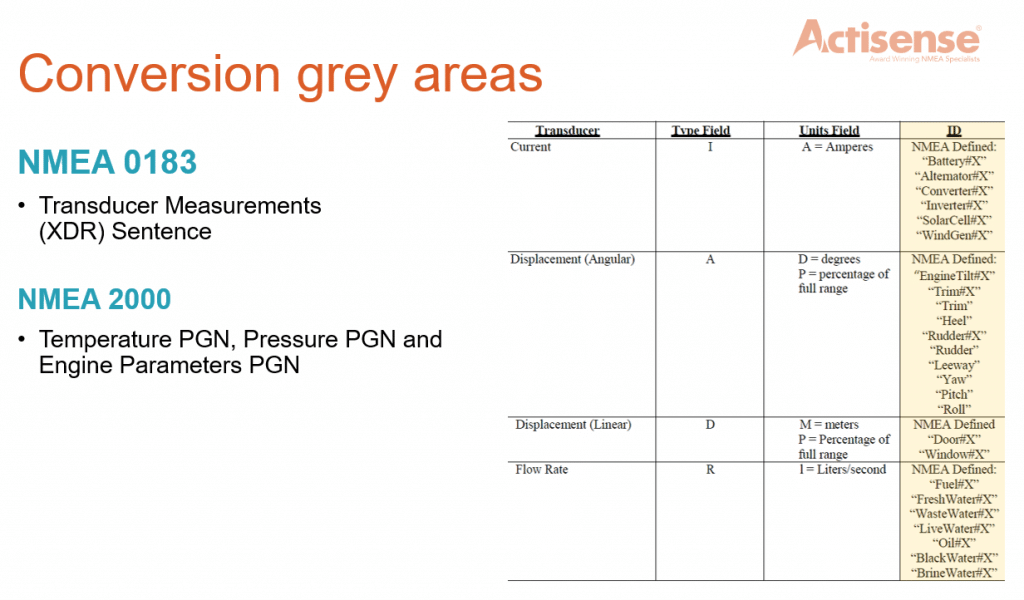 The second grey area concerns Routes and Waypoints – upon which we can touch on the high-level details here (also referenced in the graphic below): 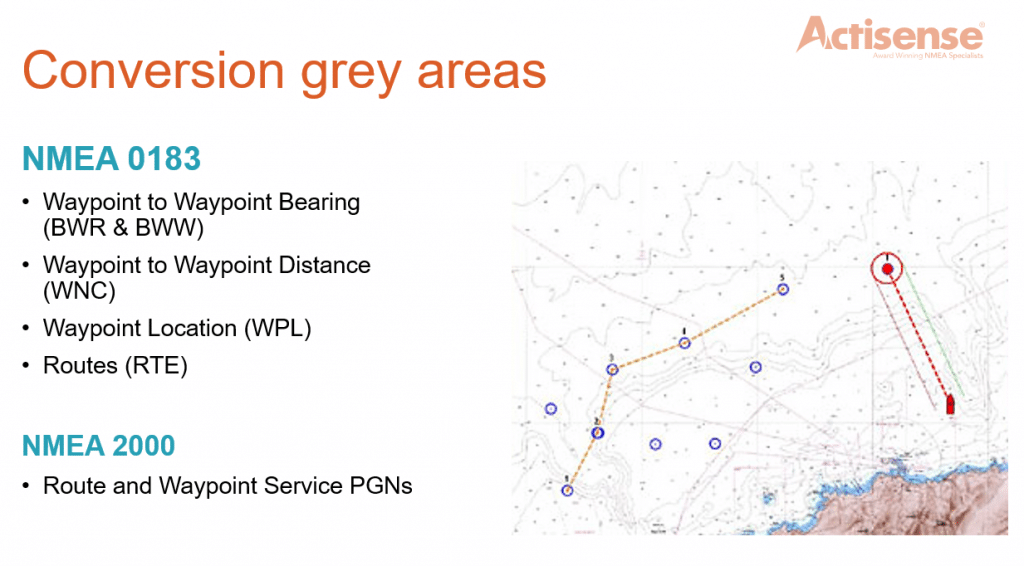 At the base layer, NMEA 2000 waypoint identifiers can only handle pure numeric values. This can be a barrier when wanting to convert waypoint details between NMEA 0183 and NMEA 2000 as users are used to defining NMEA 0183 waypoints as a text string. The current workaround is to define all NMEA 0183 waypoint names as numeric.

There exists a higher ‘Service’ layer to NMEA 2000 waypoints that can wrap and expand this base layer, however that is extremely complicated and consists of 11 separate PGNs.

In addition, through discussing this subject with engineers on NMEA Working Groups, it quickly became clear that the major marine manufacturers are not using this waypoint ‘Service’ and have instead designed their own proprietary methods to share waypoint details between their own devices. This is the reason the NGW-1 does not support this waypoint ‘Service’ layer – simply put because if no device is listening, there is little point.

There is a hope that NMEA OneNet will help solve this issue and allow waypoint sharing to become open again.

The Actisense NGW-1 is one of the most sophisticated on the market with a large and mature library of useful bi-directional conversions. That same conversion library is used inside our NMEA 2000 Wi-Fi Gateway, the Actisense W2K-1, to allow sharing of NMEA data over Wi-Fi networks.

👏 More boating! The Government confirms all forms of boating in England to restart.
https://britishmarine.co.uk/News/2020/July/UK-Government-confirms-all-forms-of-boating-in-England-to-restart-from-July-4

⁉ Need to make sense of your NMEA data?
Did you know that Actisense provides you with a host of tools to help you with both analysis and diagnostics, completely FREE to download! 🧡⛵️
https://www.actisense.com/nmea-software
#actisense #nmea #software #boat #yacht #marine #electronics #nmea2000

This short film is a MUST watch – made entirely from British footage. It’s giving us serious #waterlust! https://youtu.be/c0xsUmDjXVc
Join the story by using the campaign hashtag #SummerOnTheWater on any water-based activities you are
enjoying! #GetAfloat @britishmarine #nmea

Do you use or sell #Actisense products?

We want YOUR opinion! Please complete this very brief #survey and help us serve you better...

Find where you can buy our products