Leading marine electronics specialists, Actisense - based in Poole, Dorset, have been named one of the UK's Top 100 SmartTech Innovators of 2020.

Voted for by readers of BusinessCloud magazine - who report on technology for businesses -  the "Top 100 SmartTech Innovators" ranking was decided by a combination of a judging panel and more than 1,500 votes from the business magazine's readers.

"Our team of 27 talented individuals have worked very hard to make Actisense the well-respected brand it is today. We are very proud to be recognized by the readers of BusinessCloud as one of the UK’s top 100 SmartTech Innovators. As the way people consume technology continues to advance it’s important that our marine electronics not only respond to but also anticipates these trends." 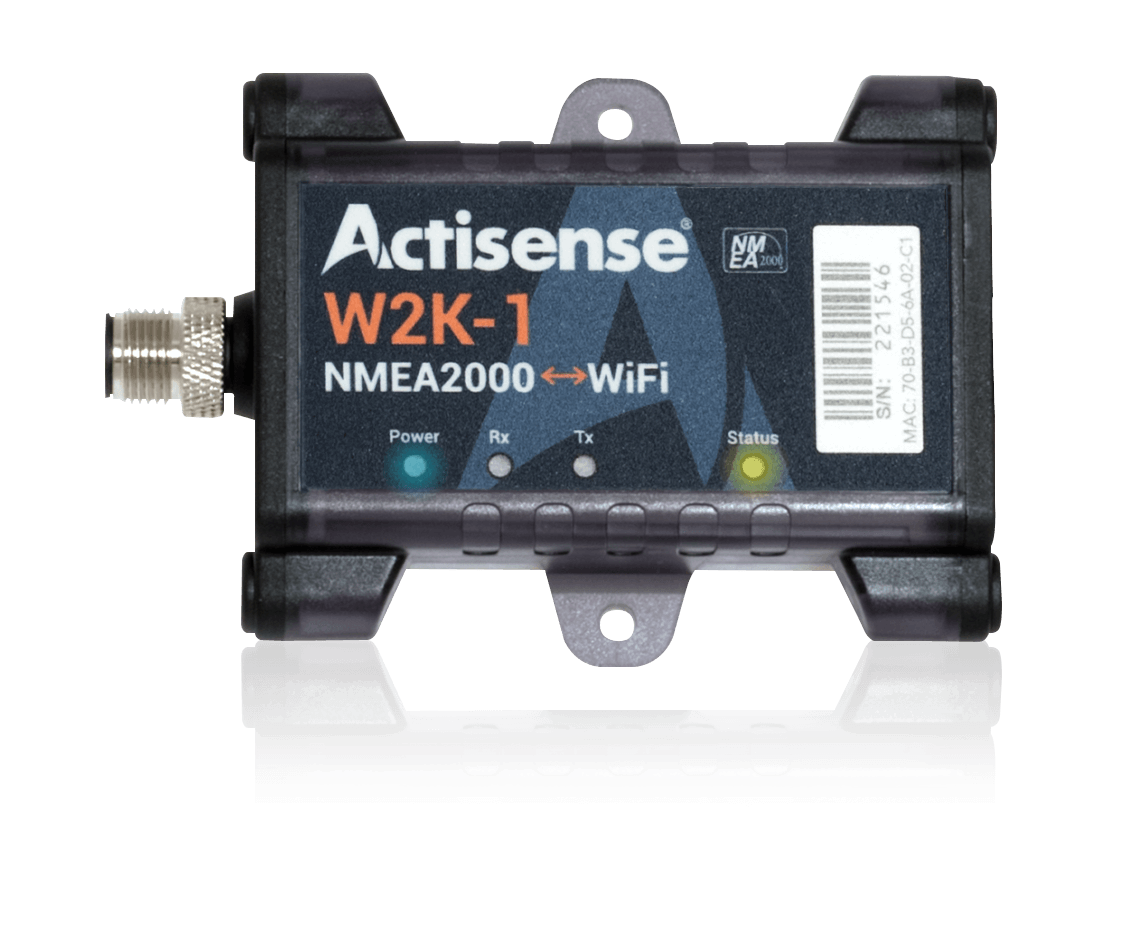 In 1997, Wi-Fi was invented and released to consumers and provided an allowance of two Megabits per second of data to be transferred wirelessly between devices. Since then, Wi-Fi has come on leaps and bounds in many ways and now, in the age of ‘Wi-Fi 6’, it can – in theory – transfer data up to 9.6 Gigabits per second, 4800 times quicker than the original standard. As Wi-Fi has developed, so has its use across the marine electronics industry.

When setting up a network, running wires behind a bulkhead can cause challenges.  There may be a lack of space and limited areas to run those wires through. This means a creation of a fully wired network can sometimes be difficult.

To guarantee data integrity between devices that are critical to a vessel’s safety, a network should always retain a wired core. Luckily, you can now extend that network wirelessly with ease. This assists the user by reducing installation time, effort and cost.

The international standards of NMEA® 0183 and NMEA® 2000 have greatly helped to foster an inclusive data network where the sharing of data and Wi-Fi freely throughout a vessel is possible. By connecting a Wi-Fi-enabled marine electronic device to mobile (phone or tablet) devices, navigational data (such as position, speed, course, wind speed, depth, engine data and AIS messages) can be viewed wirelessly anywhere on a vessel.

NMEA2000 to Wi-Fi gateways, such as the Actisense W2K-1, can transfer data messages from a data network (NMEA 2000 in the W2K-1’s case) to a Wi-Fi-enable device and to be displayed via applications running on it.

Should you maintain a hard-wire core network?

Whilst we focus this article on the benefits of using Wi-Fi, there are indeed some critically important reasons to keep and maintain a hard-wired core network on any vessel. Remember that Wi-Fi connections are not 100% reliable as they operate using radio and microwave signals and require all devices to share the same bandwidth.

This can result in device interference from time to time, particularly in busy marinas, which can reduce responsiveness to commands. With a hard-wired connection (NMEA 2000®, for example), you’ll have a far more reliable and responsive connection. Summarily, a wired core to the vessel’s data network is recommended for high reliability, allowing Wi-Fi to be used where it excels most - in extending the network to very helpful, but not safety-critical devices.

We developed the Actisense W2K-1 NMEA 2000® to Wi-Fi Gateway to create an intelligent link between a hard-wired network and a wireless network, for the ultimate user-friendly vessel.  With the added convenience of data logging, the Actisense W2K-1 is the perfect addition to your hardwired NMEA 2000® network, giving you the added ability to share data wirelessly with Wi-Fi connected devices.

Historically, there was a lack of international standards for sharing data via a serial connection, or over Ethernet or Wi-Fi. This led to an assortment of developer-designed proprietary data formats.

Each of these formats (created over the years for sharing NMEA 0183 and NMEA 2000 over Ethernet and Wi-Fi) are used by a whole host of applications created to support this growing marketplace.  Popular NMEA 2000® Wi-Fi gateways, such as the Actisense W2K-1, must, therefore, be capable of sharing data in many different formats, dictated by the appropriate application processing that data.

By way of an example, the Actisense W2K-1 supports:

Since NMEA 0183 was created, ASCII data formats have been popular in the marine industry as they can be viewed using a standard text application (such as Notepad). However, it’s worth mentioning that ‘ASCII’ formats are inefficient, and its messages are typically twice the size of an equivalent binary format.

Actisense ‘RAW’, ‘N2K’ and ‘NGT’ use a binary format that can halve the data bandwidth required, which is inevitably of financial benefit if that data is eventually shared over a 3/4/5G or satellite data link.

‘RAW’ formats can be used to create a low-level interface to share individual CAN frames, which has its benefits, however, this places the extra burden of reconstructing NMEA 2000 messages on the receiving application.  This is the reason why ‘N2K’ and ‘NGT’ data formats are more popular as they create a higher-level interface to share complete NMEA 2000 PGNs, ultimately making application development quicker and easier.

What are the best connection methods

The two dominant connection methods on Wi-Fi networks are Transmission Control Protocol (TCP) and User Datagram Protocol (UDP).  Each protocol has advantages and drawbacks – it very much depends on the data type and application as to which the ‘best’ protocol may be.

Typically, TCP will be best as it has built-in “data lost” detection and retransmission to offer guaranteed data delivery, albeit with a lower data speed.  The other cost comes in the limiting of the number of devices that can connect and receive data from the Wi-Fi gateway (typically 5-10 devices).  However, if all data being shared is periodic and the application can handle the occasional data loss, UDP does offer the highest data speed and the option of increasing the number of devices that can receive the data to almost an unlimited number.

NMEA 2000® Wi-Fi routers such as the Actisense W2K-1 can create a Wireless Access Point (WAP) that mobile devices will connect to, in order to receive data (and to optionally configure that gateway).  NMEA Wi-Fi gateways usually offer the option of connecting to an existing Wi-Fi network (and more importantly any wired network it may be part of), however many gateways offer this at the expense of disabling their own WAP.

By joining the NMEA Wi-Fi gateway to an existing network, you have the benefit of making the gateway’s data available to any device on that network.  The Actisense W2K-1 will not force the user to choose between having access to its WAP and joining an existing network as we have designed it to do both at the same time, guaranteeing accessibility directly through its WAP whilst sharing data on an existing network.

Using the W2K-1’s logging capabilities, you have that guarantee that even if the Wi-Fi signal is lost and the application fails to receive the data, the NMEA 2000 data will still be logged to the internal industrial spec SD card.  Knowing that the logged data can be retrieved whenever required can be a real comfort, especially in the rare but real situation of proving the facts of a collision between two vessels.

There is tremendous value in that data which, once analysed, can provide insights on improvements and efficiencies that can be made – whether in racing, workboat or indeed any other scenario, giving you a better, safer boating experience overall.

Actisense are the leading specialists in the design and manufacturing marine electronics with more than 80 distributors in over 40 countries. To purchase the Actisense W2K-1 NMEA 2000® to Wi-Fi gateway, find your nearest distributor or call us for more information on 01202 74662. 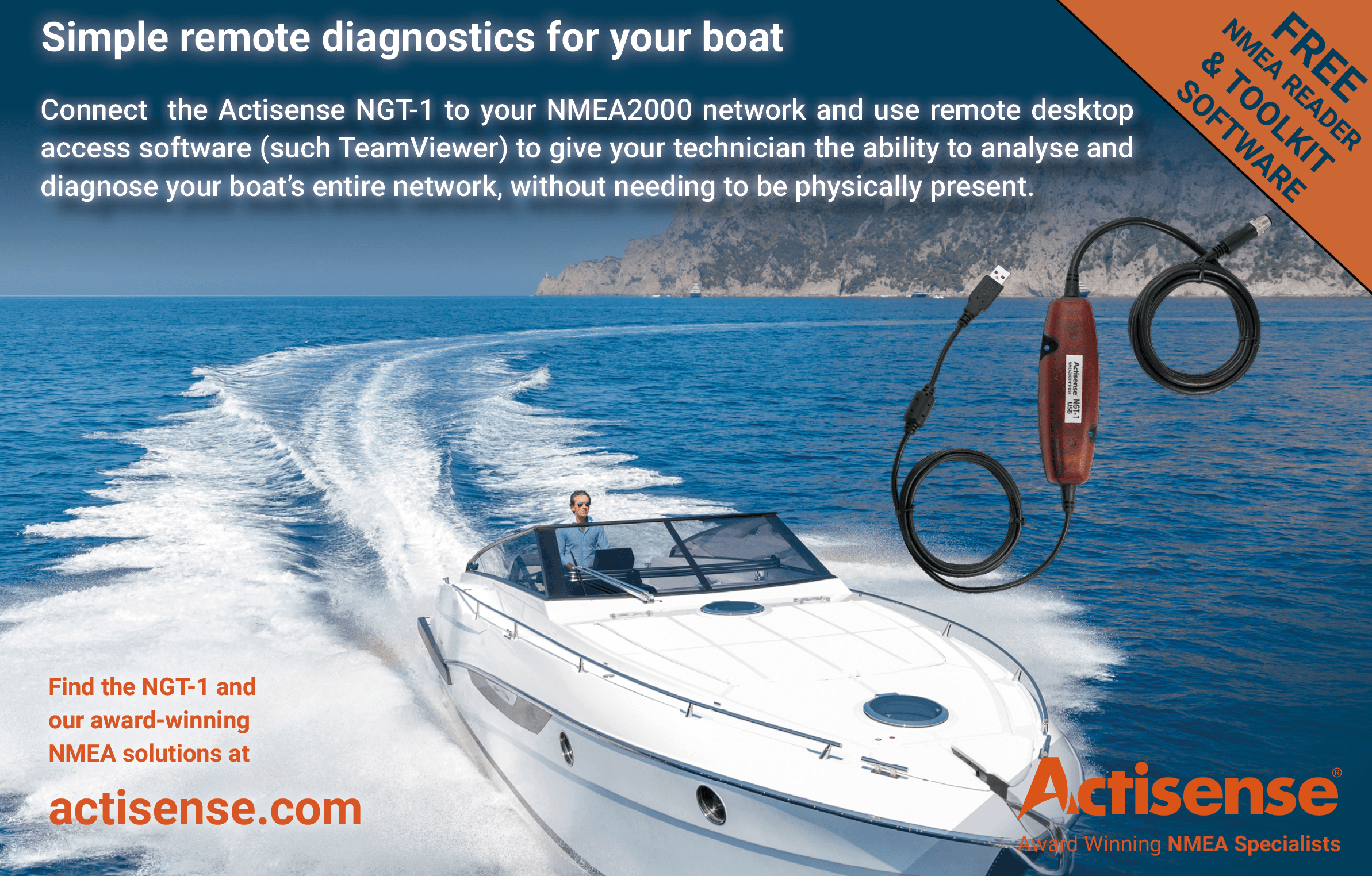 As the world finds itself in the grips of the COVID-19 Coronavirus pandemic, boat installers may find it more challenging than ever to gain access to their customers’ boat in order to perform vital diagnostic work on the boat’s NMEA 2000® network.

Here at Actisense, we have had several conversations with concerned dealers and installers. They have said that they are able to do the work but just can’t physically be on site. We want to reassure our customers that vital marine diagnostics are still possible with our NGT-1 NMEA 2000 to PC interface.

With an NMEA 2000 to PC or USB interface, you can precisely transfer messages to and from the NMEA 2000 bus. The Actisense NGT-1 has a male Micro connector, allowing direct and simple connection to an NMEA 2000 bus. We offer two versions, the standard NGT-1-USB or the NGT-1-ISO, a more specialist option with an Opto-isolated input and ISO-drive output. Choose the ISO variation for safely interfacing with RS232 or RS422.

How to perform remote NMEA 2000 diagnostics

In light of the current situation, we have put this graphic together to try and help as many of you as possible. Using our NGT-1 NMEA 2000 to PC Gateway, you can give your installer direct access to your network by following these steps:

Using this hack, your technician will be able to gain direct access to your boat’s network and complete any diagnostic or analytical work accordingly – all from a safe, remote location. Stay safe and we hope to see you out on the water soon!

To find out more about the Actisense NMEA 2000 to PC interface devices, find your nearest distributor. We have more than 80 distributors in 45 countries.

As marinas around the world continue to reopen, we're excited to say WELCOME BACK ⛵️🧡
If you need help with your NMEA data, have a look at our whole catalogue of solutions at http://www.actisense.com.
#boating #yachting #nmea #nmea2000 #marine #sailing #marineelectronics #boat

Thank you to Farm Progress for this great article they've written about our #agritech project with The Climate Corporation. https://www.farmprogress.com/technology/communication-paramount-latest-ag-tech
#smartfarming #farming #farmer #precisionfarming #precisionagriculture #agriculture

The @YouAre_TheMedia weekly email today has a great suggestion. Try saying “I don’t know, but let’s figure it out together.”
Some businesses are trying to project certainty as we live through the biggest ever demonstration of how much we don't know.